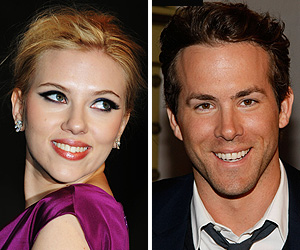 Scarlett Johansson and Ryan Reynolds are the latest Hollywood couple to take their relationship to the next step. Her rep, Marcel Pariseau, has confirmed to People magazine that the two are engaged! "They're both thrilled," says Pariseau.

The couple, first spotted together in the Big Apple in April 2007, have been together ever since. In February, Johansson addressed rumors she was planning a trip down the aisle with "The Proposal" actor, telling "Extra" it simply wasn't true - but now it is!

Reynolds, 31, recently popped the question to Johansson, 23 -- and gave his bombshell fiancée a rock to talk about! Sources tell the magazine that "The Other Boleyn Girl" is eager to debut her ring with a Dolce & Gabbana gown at tonight's Metropolitan Museum Costume Institute Gala -- one of the major NYC social events of the year.