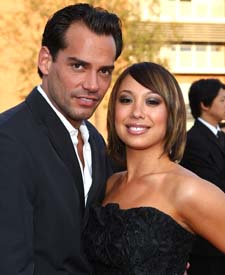 "Dancing with the Stars" contestant Cristián de la Fuente is fighting back! After suffering a muscle cramp in his arm during last Monday's show that landed him in the ER, rumors are circulating that de la Fuente faked his own injury.

Now, de la Fuente and partner Cheryl Burke are opening up exclusively to "Extra" on rumors that the Chilean soap star faked the cramp in order to receive sympathy votes. "I would need to be out of my mind to fake something like this," said de la Fuente, who ruptured a tendon in his bicep.

Although de la Fuente and Burke received the lowest scores last week, it was Shannon Elizabeth and partner Derek Hough who were sent packing.

For now, Cristian is able to use only one of his arms, but he is committed to staying in the competition. "If people voted for us and they would like us to be on the show, I would like to continue and not give up," he said. Burke also has confidence in her dance partner, saying, "If Heather Mills did it with one leg, we can do it with one arm."

The duo will continue dancing on tonight's show on ABC at 8/7c.