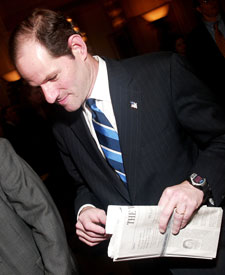 Eliot Spitzer may not be linked to another prostitution ring after all. The New York Daily News says law enforcement officials shot down a report claiming that the Love Gov was a client of Manhattan madam Kristin Davis' Wicked Models.

Davis' little black book -- or rather, a computer spreadsheet -- has revealed the names of more than 2,000 people who contracted for sex services. The spreadsheet allegedly includes lawyers, doctors and businessmen -- even a professional poker player.

While the disgraced former governor hasn't been officially linked to Wicked Models, the New York Post says Manhattan prosecutors are planning a "secret summit" today to discuss how the Davis prosecution could affect the case against Spitzer. Earlier this month, Spitz was identified as "Client #9" in an affidavit exposing The Emperor's VIP Club.