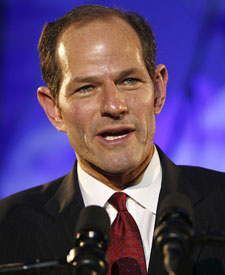 Eliot Spitzer's penchant for high-end prostitution rings may not have been exclusive to The Emperor's VIP Club. The New York Post is reporting that the disgraced former governor was a client of yet another call-girl operation in Manhattan, with slightly lower prices.

The Post says the Love Gov was a frequent customer of Wicked Models, a now defunct business, allegedly lead by busty madam Kristin "Billie" Davis. Madam Davis reportedly created a multi-million dollar empire by pimping out ladies for as much as $1,000 an hour (a bargain compared to Ashley!). Spitzer reportedly hired Davis to arrange his rendezvous. Davis, 32, was in court yesterday to face charges of money laundering and promoting prostitution, and is held on $2 million bail.

Spitzer was identified as "Client 9" in an affidavit exposing The Emperor's VIP Club. His call girl of choice, Ashley Dupre, is a "Girls Gone Wild" alum.