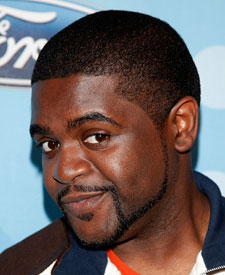 It was a night of cheers, jeers and fears as another "Idol" got his walking papers. Fans weren't feelin' it for Chikezie, and they voted him off the "American Idol" stage, giving bottom two contestants Syesha Mercado and Jason Castro a huge sigh of relief... for at least another week.

Tattooed crooner Carly Smithson cleared up a wild rumor that she's having a baby, telling Ryan Seacrest, "Apparently I'm pregnant -- but I'm not!"

Tiny Ramiele Malubay's racy reputation continues to grow as more photos surfaced of her getting wild with some friends, but Randy Jackson says fans should put the controversy aside. "It's a singing competition. Come on!" he said. "We only judge the singing."

Former "Idol" Constantine Maroulis made a surprise stop at the elimination show, where season two alum Kimberly Locke rocked the house with a killer performance. But real fireworks of the night belonged to Ryan and Simon, after Ryan took yet another swipe at Simon's shirt. "A button-less Simon Cowell," Ryan announced. But Simon hit back when a fan asked, "I was wondering, what do I need to do to take Ryan's job?" Simon responded, "The good news is you don't need a lot of talent!"

Why all the jabs? As Simon explained when "Extra" caught up with him at the Peninsula Hotel in Chicago, "I think he's slightly obsessed with me and sort of wants to impress me in a strange way by being funny."

"Idol" fans will see who really impresses Simon when the top nine take the stage next Tuesday on FOX.