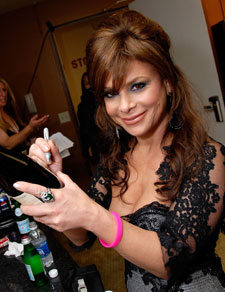 Paula Abdul’s live-in BF, club owner J.T. Torregiani, was spotted while shopping for diamond rings in the VIP room at Tiffany in Beverly Hills, as reported by In Touch. Will Paula be making another trip down the aisle?

Torregiani, co-owner of trendy Hollywood hotspot Le Deux, browsed the engagement rings, with one insider saying, "J.T was looking big stones over six carats," adding, "He didn’t seem to have a budget, but definitely wanted something that would impress Paula." Six carats oughta work!

This would mark Paula’s her third marriage. She was briefly wed to Brat Packer Emilio Estevez from ’94 to ‘96, then to sportswear designer Brad Beckerman from ’96 to ‘98. Perhaps the third time will be the charm for the wacky judge.