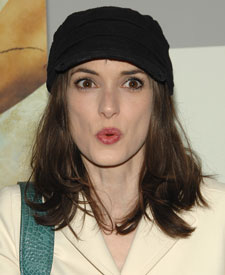 The net was abuzz this morning with stories about Winona Ryder setting off alarms at a CVS Pharmacy in L.A. – but it’s just not true. Just last week, Winona put the kibosh on another Internet rumor that she was set to marry Rilo Kiley guitarist Blake Sennett. Also hogwash.

The current story goes that the once cash register-challenged actress reportedly set off the store alarm, and security supposedly found a couple of makeup items that weren’t paid for. It’s all baloney. Winona’s rep dismissed the story, saying, "Nothing of the kind happened. She has no recollection of being in a CVS recently or otherwise."

In 2001, the doe-eyed beauty was popped after walking out of swanky Saks Fifth Avenue in Beverly Hills with more than $5,000 in designer clothes. She was convicted of grand theft and vandalism, sentenced to community service and probation and slapped with some hefty fines.

Winona will next be seen in the film adaptation of Bret Easton Ellis’ "The Informers."