The political wives just can’t catch a break! First it was Hillary Clinton, then Dina McGreevey, then Cindy McCain had to dispel rumors of John’s alleged affair, and now New York Governor Eliot Spitzer’s wife Silda is standing by her man after news of a sensational prostitution scandal that has rocked the statehouse. 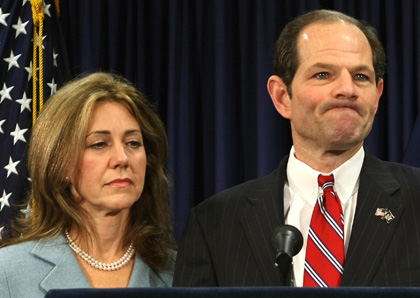 Silda Wall Spitzer has a Harvard law degree but left her career to raise her three daughters with the now disgraced governor, and to chair the non-profit Children for Children. She stood stoically at her husband’s side during a news conference where he apologized for his reported involvement in the call girl sex ring. Mrs. Spitzer watched quietly as her husband said, "I have acted in a way that violates my obligations to my family and violates my – or any – sense of right and wrong. I apologize to the public who I promised better." Spitzer didn’t specify exactly what he was apologizing for, and reporters continued yelling questions about whether or not he plans to remain in office.

The scandal echoed the travails of gubernatorial spouse Dina McGreevey, whose husband Jim resigned as governor of New Jersey after word of a gay affair. Dina told CNN that being in the eye of the media doesn’t help the already humiliating situation the Spitzer’s have been faced with, saying, "She's ridiculed and shamed in front of virtually the entire world. She’s not only dealing with her own personal pain but trying to protect her daughters from this." McGreevey said the quickest way to spare the upcoming pain and embarrassment would be for Eliot to immediately resigning his governorship.

Governor Spitzer was nabbed in a wiretap investigation. He’s alleged to have paid a prostitute to take a train from New York to Washington, spawning a federal investigation because of the crossing of state lines, reports the AP. An anonymous source revealed that Spitzer was caught "moving large amounts of cash from several bank accounts to one that is operated by a call-girl ring."