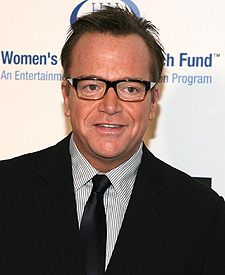 Tom Arnold hit the "Extra" set and jokingly dished about how he got his role in Courteney Cox’s show, "Dirt" -- saying he had to please David Arquette first! "Courteney and I hooked up," Arnold quipped, "Well, I had to hook up with David first. That’s the rule!"

Arnold plays a character that critics have called a cross between David Hasselhoff and Alec Baldwin. Tom parodies Hoff’s real-life escapade of eating fast food off the floor, and echoes Baldwin’s shenanigans by calling his on-screen daughter a "little narcissist" in a voicemail.

"Extra" asked how the parodied actors felt about Tom’s portrayal. Tom says it’s not vindictive, insisting, "I wouldn’t have done it if it was to pick on Alec Baldwin or David Hasselhoff." Tom also dished some real-life dirt, saying that he tried to convince Britney to enroll in a 12-step program -- after he found her on a hallway floor in their building some time ago.