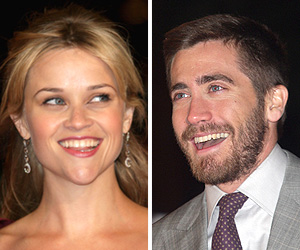 The lovebirds did some window-shopping, strolling hand-in-hand through the chilly streets. Jake was seen kissing Reese’s forehead as she giggled.

Their recent PDA is quite different from a year ago, when the paparazzi-shy duo first began dating. Since meeting on the set of 2007’s "Rendition," they've been snapped dodging photogs on dates in Beverly Hills and Brentwood.