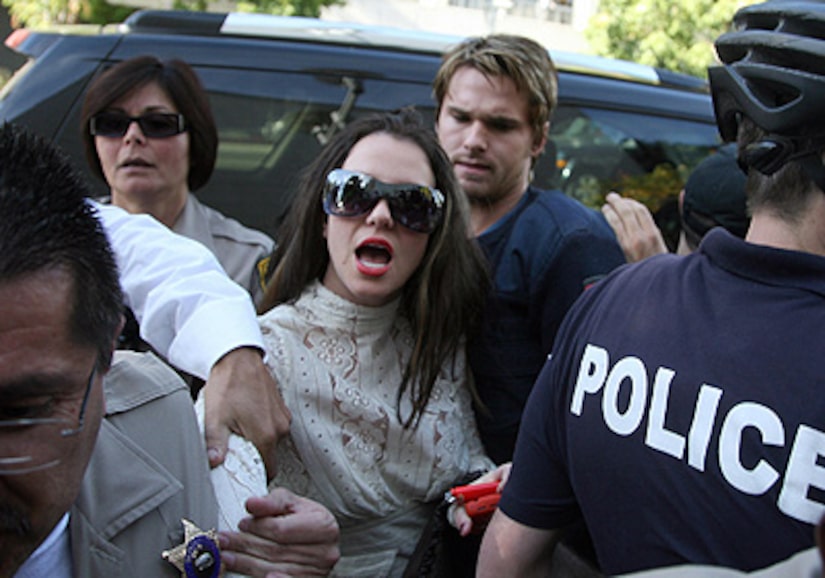 Britney Spears was taken by ambulance to UCLA Medical Center for a psychiatric hold last night.

Shortly after 1 A.M., police were called to her Studio City home and she was taken in for treatment on a 5150 hold. Under a 5150, a patient is deemed a danger to themselves or others and is admitted under a 72-hour emergency hold. Last time Brit was hospitalized, she left after just one day.

Just like the Jan. 3 episode, the scene outside her home last night was surreal. A cavalcade of police motorcycles and cars lined the streets as two helicopters flew overhead. Paparazzi scrambled to get a shot of Brit inside the ambulance, but she left through a side gate and escaped the frenzy.

Reports have been circulating that Britney tried to commit suicide, but X17online.com reports that her mom Lynne said "Britney is fine."

Both of Britney's parents are at the hospital with her right now, along with her confidant Sam Lufti. Brit's photog boyfriend Adnan Ghalib reportedly drove with Lynne to the hospital.

X17 says Sam was denied entrance into the hospital at first, and there are reports that the family is fighting amid fears for Britney. Lynne is reportedly furious with Sam and worried about his intentions with the troubled star and hasn't held back in letting Britney know it. Britney's dad Jamie reportedly got in a screaming match with him in the hospital halls because Sam was trying to make medical decisions for Britney.