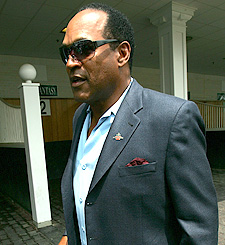 A police transcript reveals a shocking claim that O.J. Simpson wanted armed men to confront two sports memorabilia dealers in a Las Vegas hotel room, according to the Associated Press.

Co-defendant Walter Alexander claims in the transcript that Simpson asked for the armed men. Alexander's lawyer announced this week that he would plead guilty to a lesser charge and testify against Simpson.

Simpson faces charges of armed robbery, conspiracy and coercion. If convicted, he could spend the rest of his life in prison.