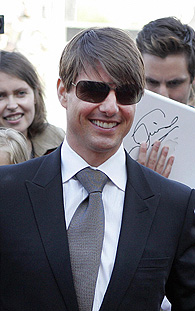 The man involved in a plot to extort millions of dollars from Tom Cruise has been found dead.

David Hans Schmidt, often called the "Sultan of Sleaze" for his collection of scandalous celebrity memorabilia, committed suicide at his home in Arizona on Friday, according to police.

He was on house arrest and was facing up to two years in federal prison.

Schmidt admitted he was involved in a plot to extort money from Cruise in exchange for stolen photos of his wedding to Katie Holmes. In court papers obtained by "Extra" earlier this summer, it was revealed that Schmidt met with Cruise's representatives and told them, "It would not look good for anyone if the photographs become public."

He pleaded guilty in August to one count of transmitting threatening communications with the intent to extort.