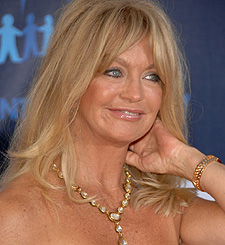 Goldie Hawn says the best lesson she can give her kids is that life is hard.

"The real, hard truth," Goldie says is the most important belief she gives her children. "We don't sugarcoat it. We are a no bulls*** family."

"Extra" was with Goldie at the Playing for Good Foundation Summit in Spain, which aims to benefit her children's charity, The Goldie Hawn Institute.

The 61-year-old actress and mother has been keeping busy with her grandson, Ryder, whom she calls "the smartest human I know, and he's only three and a half."

Gallery! Goldie Hawn Through the Years

Now Goldie will have another genius to coo over, because her son Oliver is expecting a child with his wife, Erin.

She continues, "I could've had so many children. I would've been happy with nine. Didn't work out that way, but now we're getting more kids."

When the kids go to Grandma Goldie's house, she keeps them busy. "[We] cook, play, go places, talk a lot - I don't do a lot of baby talk," she reveals. "We play ball, swim, dream, create, laugh."

Goldie has been with longtime love Kurt Russell for more than 20 years, and she has publicly expressed her desire to stay unmarried.

"I know a lot of married people who are not very committed, so it really has to do with your philosophy and who you are," she explains.

When other couples mimic their relationship, as Jim Carrey and Jenny McCarthy have said they do, Goldie says she thinks it's "great."

With so much focus on the family, Goldie says she tries to stay away from the lure of celebrity. As her daughter Kate Hudson makes headlines over her relationship with troubled ex Owen Wilson, Goldie tries to stay focused on what really matters.

"We don't involve ourselves in it nor did I have any patience for it," she says.