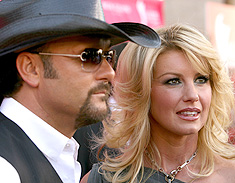 Faith Hill and Tim McGraw are revealing to “Extra” that their Hollywood home was raided while they were on vacation in Tennessee.

Tim and Faith aren’t the only ones suffering at the hands of criminals – the burglary is just one of many occurring all over L.A., and it’s leaving authorities baffled!

The mystery men have been breaking into homes in L.A.’s richest areas, including Brentwood, Bel-Air and Beverly Hills. Police believe the criminals are working in a highly advanced group – because they have never left a fingerprint behind!

The Los Angeles Times reports that the burglars have also hit the home of former Paramount Pictures chief Sherry Lansing, and stole $500,000 in cash and jewelry from the Bel-Air mansion of Clippers basketball star Cuttino Mobley.