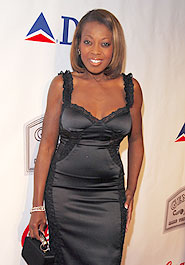 Star Jones is making her return to television, but she’s telling "Extra" that fans won't get what they might expect: her new TV talk show will end the rumor that she will return to “The View.”

“Well, it absolutely puts it to rest because I’ve seen the TV Guide pages, and it says, ‘Star Jones Show,’” she said.

Though she’s done with “The View,” Star is revealing for the first time who she thinks should replace former foe Rosie O’Donnell.

“I hope they bring in someone who is a person of color to sit in as a permanent host,” she said. "Because I think that adds to the editorial depth of the show.”