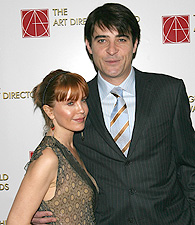 Goran Visnjic, who plays Dr. Luka Kovac on “E.R.,” is acknowledging he cheated on his wife with a woman who claims he fathered her child.

Visnjic has agreed to take a paternity test to see if the 4-month-old baby is his. If it is, he says he’ll pay child support but won’t seek custody.

“It is not something that I'm proud of, of course," Visnjic told a Croatian magazine. “But I am ready to accept all the consequences of my act."

He said he “remembers nothing” from his night with the woman last summer, because he was jet-lagged and had consumed alcohol.

Visnjic, 34, has been married to Ivana Vrdoljak since 1999, and they adopted a son this spring.

"I was always against cheating," he told the paper. "I still can't believe I did it."