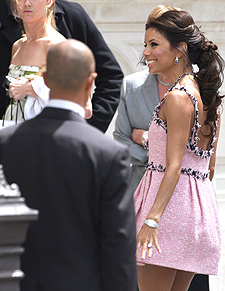 “Extra” spotted newlyweds Eva Longoria and Tony Parker arm-in-arm, touching down Sunday in Miami on their way to their Caribbean honeymoon.

Eva was sporting her brand-new, gigantic diamond sparkler – a wedding band made of 107 brilliant and square-cut diamonds.

“Extra” has the details of the historic Paris cathedral where they tied the knot.

The vows were exchanged in English and French, and Eva laughed as she said them in Tony’s native language.

“Extra” spotted new mom Sheryl Crow on the arm of a handsome mystery man, and our own Mario Lopez came with his “Dancing with the Stars” girlfriend Karina Smirnoff.

Guest Ryan Seacrest said this morning on his radio show, “It really was one of the most beautiful ceremonies and receptions I’ve ever seen in my life,” adding that the whole thing made him want to get married, too.

To get into the church, the blushing bride had to be shielded by a wall of black umbrellas to keep the paparazzi from getting a shot.

At the civil ceremony Friday, where Eva and Tony legally tied the knot before their second bash, Eva set off a blaze of flashbulbs in a pink Chanel mini dress as she waved to fans.

People said it was a $75,000 mermaid-style gown made of silk wool, with silk metallic embroidery and a five-foot long train.

Afterward, everyone moved on to the big post-wedding blowout at an opulent 17th century castle outside of Paris, which cost the couple a whopping $500,000.

It was reportedly filled with candles and had a red-toned theme. Tents were set up in the mile-long garden, and the wedding gifts were just as jaw-dropping.

People magazine reported that every single one of Eva’s female guests got an 18K bracelet from Van Cleef and Arpels, with a miniature clover charm meant to bring good luck.

The extravagant reception was capped off by an explosion of fireworks, fitting for a happy couple that spared no expense for the wedding of the year.