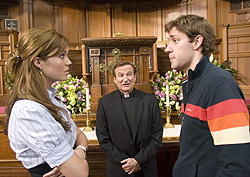 Funnyman Robin Williams is hitting the big screen once again, this time as a man of the cloth who puts pop princess Mandy Moore and “The Office’s” John Krasinski through a grueling pre-marriage course before he'll pronounce them man and wife,

When asked how he’d have done had he been required to take a quiz before marrying his wife, Williams joked, “If there was a hands-on exam I’d do very well.”

Meanwhile, co-star John told “Extra” that Robin was a non-stop laugh fest on the set, adding, “It’s like the best abs workout you can get.”

"They had fun, I had fun,” Williams said.

As for co-star Mandy, Robin told us, “She is so sweet, so sexy, and yet there's a kind of innocence. But I know that's all a sham.”

“Oh he thinks I’m hiding something?” Mandy asked. “I don’t know what he’s talking about. He’s out of his mind, alright.”