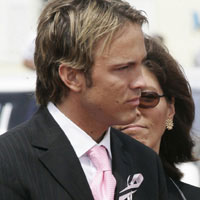 “Howard and Larry are really getting along,” Birn told us. “Larry actually would have a relationship with Howard. He doesn’t blame him. It’s not his fault. Anna had her own mind.”

In other news, Larry told OK magazine that Anna Nicole e-mailed him just three days before Dannielynn’s birth, saying, “Don’t fall in love again. I'd be a bit jealous."