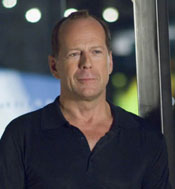 “There is danger everywhere, you never know what’s going to happen,” Halle dished of the flick. “They met online and had one hell of a weekend.”

In the new movie, Halle plays an investigative reporter who goes online and undercover when her girlfriend is murdered.

Bruce, a powerful advertising executive, becomes the number one suspect in the crime.

“It’s an urban, smart thriller,” Bruce said of the movie. “Who done it, who killed who.”

Between takes of the film, which was shot in NYC, we chatted with Bruce and got the lowdown on what it’s really like to work alongside the gorgeous Halle.

“You seldom get a part where you get to flirt, and I did,” Bruce said with a smile.