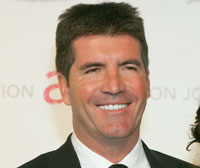 It's finally Simon Cowell's turn to face the music as he gets grilled by Anderson Cooper on "60 Minutes."

TV's beloved Mr. Mean talked about everything from his acidic "Idol" attitude to the music career that has turned him into a multi-millionaire.

Here is an excerpt from the interview:

Anderson Cooper: Do you think everything should be shown on TV?

AC: Public executions should be on TV?

SC: I think they should be given a choice to watch them, sure why not?

Simon also revealed to Anderson Cooper that he was once offered $100,000 to watch and judge a couple making love.

SC: I stupidly turned it down. It would be a much more interesting story now.

AC: Some people have equated it to a medieval stoning, what you do on "Idol."

SC: It's an interesting thought for a show that we could actually do that but...

AC: You would consider that?

SC: It's human nature, we are fascinated with it.

Anderson also has a big surprise for Simon -- catch the big reveal and the revealing interview, Sunday on "60 Minutes."