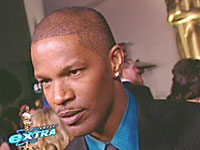 The after-parties were plentiful at the culmination of Sunday night's 78th Annual Academy Awards. And at the Vanity Fair party, there were no losers as stars like Jen Aniston, Madonna, JLO and Jamie Foxx gathered for a festive celebration!

Jennifer Aniston and Vince Vaughn arrived separately but were snapped together inside. And Madonna and Guy Ritchie came arm in arm.

JLO met hubby Marc Anthony inside, and together they met the Travolta's while Jamie Foxx and Jake Gyllenhaal threw down.

The Vanity Fair party was the ultimate place to be for star sightings, where "Extra" caught Madonna chatting it up with Jon Voight and Sandra Bullock. We also found Best Actor nominee Heath Ledger laughing it up with Joaquin Phoenix.

Mick Jagger joked with "Extra" about his wardrobe and Keira Knightley changed hers. "I got something that I can slip through people in," she revealed.

Oscar host Jon Stewart talked about his performance: "It was fun," while Eve cozied up with a dateless Matt Dillon.

"It's a glamorous night. It's exciting," Elton said of the Oscars. His guest list included hot couple Nicollette Sheridan and Michael Bolton, who blinded photographers with the giant ring on her finger.

Sassy Lindsay Lohan was practically speechless after an unexpected compliment from Sharon Stone. "She's so good in Bobby," Stone confessed, who was eager to praise another friend: Oscar winner George Clooney. "I thought his speech was so eloquent and wonderful," she revealed.

All in all, Elton and friends were able to raise 2.9 million for his AIDS foundation. Now, that's something to celebrate, although the party didn't stop here either!

Next up on the Oscar party train was the Us Weekly-Rolling Stone party, and the stars were rolling in to this bash all night long!

Professional partiers, Nicky and Paris Hilton, got down. But not before Nicky worked the red carpet while her squeeze Kevin Connolly rated host Jon Stewart's performance: "I thought Jon Stewart was great! That's not an easy task and I thought he did a great job."

Inside the Us Weekly bash, "Extra" got plenty of juicy gossip, including Jamie Lynn Sigler opening up about her recent split from A.J. Discala. "It's what's best for all of us," she revealed. "I still have a tremendous amount of love for him."

And "Extra" went on rumor control with "Dancing with the Stars" winner, Cheryl Burke. So, are her and Nick Lachey really an item? "No, we are not! We are just good friends!" she promised.

And only "Extra," with the help of online entertainment powerhouse TMZ.com can take you to the most secretive Oscar night party of all! The SoHo House in the Hollywood Hills. Here, we spotted JLO and her hubby cutting it loose alongside Joaquin Phoenix, Matt Dillon, Heath Ledger and Oscar alums Jamie Foxx and Cuba Gooding Jr.

And the celebrity sightings didn't stop there! Every member of the Hollywood socialite scene stopped by to celebrate including Lindsay Lohan, Paris Hilton and her new nemesis', Mischa Barton and Nicole Richie.

Cheers to this year's Oscar winners!