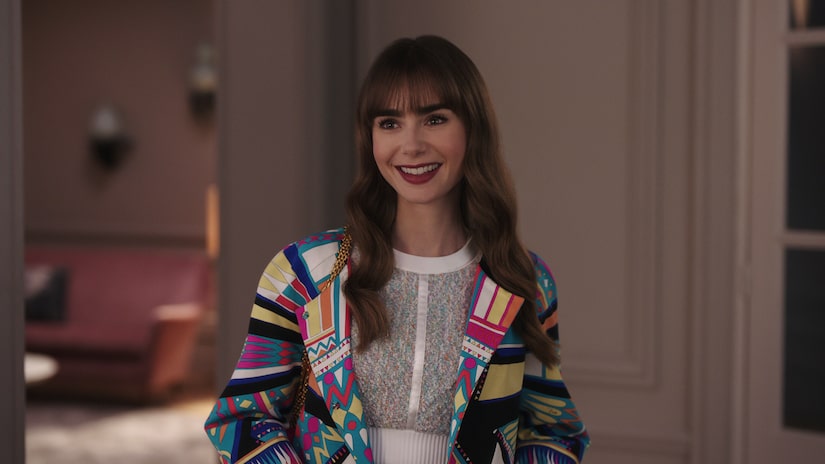 Lily teased that her character Emily is torn between “two jobs, two men, and two countries” and says the season wraps up in an unexpected way.

Along with her character having “a lot of decisions” to make, Lily elaborated, “Once we get to the finale, which feels like five episodes in one, you see, you know, things start to unfold in a way that no one would have been expecting, but I think what’s beautiful about this season is that there is a celebration of all the characters storylines that also don’t involve Emily, which I was really excited to showcase the other amazing talent on this show, and then to have it all woven together to create, you know, for the betterment of the show in general.”

Camille’s character is going through some tough decisions too. She said, “She’s torn between Gabriel, her friendship with Emily, what’s happening with her family… I’m happy in this season that we get to see more of her work side as well, so we see her more at the gallery.”

Ashley’s character Mindy is also “torn” to choose between a guy she likes and her close friend Emily. The conflict that her character faces made it “really exciting” for Ashley to tackle.

One of the notable scenes this season is when Emily pulls the microphone from Ashley to do some singing. Lily admitted she was “nervous” to film the scene because of Ashley’s “phenomenal voice.”

To calm her nerves, Lily came to the realization that she’s not her character. She said, “There’s a huge difference there… If she’s singing for the purpose of stepping outside her comfort zone… right off the bat, I was very honest with the fact that as nervous as Lily would be, it would emulate Emily’s nerves… My character had to put herself out there for Alfie. It’s like, what better way than to do something totally unexpected for Emily?”

As for shooting in Paris, Ashley noted that it’s “the greatest joy” to be celebrating the new season together. She added, “We’ve never gotten to have a premiere together, so this has just been such a great reminder of the joy of what this cast is.”

Lily chimed in, “Being able to be together shooting this season, pre-COVID, during COVID, a little further outside of COVID the past year… it’s been such an interesting transition to maintain such an intimate experience on set and have the show become bigger and bigger… To be able to shoot in this city, exploring together, having all these firsts together and having so much fun on and off-screen, it’s really rewarding.”

“Emily in Paris” Season 3 is streaming December 21 on Netflix.