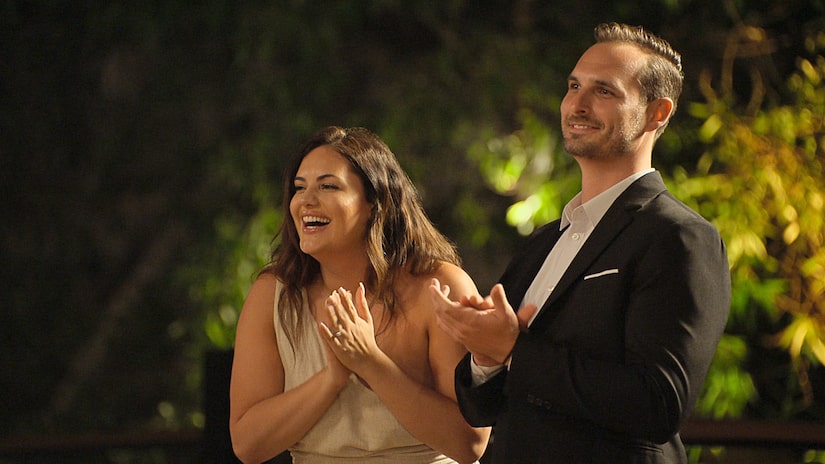 Alexa Alfia and Brennon Lemieux are opening up about their life together after saying “I do” on the third season of “Love Is Blind.”

“Extra’s” Katie Krause spoke with the pair, who have been married for over a year now.

Along with giving a glimpse of their Dallas home, they also revealed whether babies are in their near future!

Of possibly expanding their family, Alexa commented, “It’s when’s it going to happen.”

Brennon noted that it “could” happen in the near future, admitting, “I don’t know. I’m just a scientist, I’m not a doctor.”

As for their life as a married couple, Alexa shared, “We had a full year and a half to really be, like, confident in our relationship before putting it in the public eye because people can be assh*les.”

Brennon opened up on the challenges about married life, saying, “So quickly hopping into a marriage like this, you know, it’s weird. She always said this, this is her phrase: ‘Don’t let roommate issues become like marriage issues’… We kind of had those little roommate issues beforehand, like a few months in.”

Alexa chimed in, “Because, you know, we’re all doing all these incredible things as part of the show. We’re on these beautiful dates and you’re constantly on a schedule and then it’s like peace out, like, ‘Oh, there’s no babysitter anymore, like, you kids just get to do whatever you want, just make decisions… After a few months of, you know, the hive, we’re just two people living together and we really had to remind ourselves to keep the romance alive, to keep dating each other.”

Brennon also revealed what he wished the audience had seen that was cut out from the show. Saying “the proposal,” he explained, “I actually wasn’t going to propose to her on the show because one, like, I hadn’t spoken to her family, like, we hadn’t met. I didn’t have a ring.”

He went on, “I know the show provided one, but I didn’t have a ring for her and I went in the pod that day and I said, ‘Hey, this is what I’m feeling’ and her response, I think that’s what clicked it for me that I was definitely going to proposal. She said, ‘That stuff that doesn’t matter, you can propose to me with a ring pop and I’m still gonna love you.’ So day 10, when we saw each other, I get down on one knee and actually changed out, in the box, there was a ring pop in there, which was kind of funny.”

The pair also showed off their rings, which they haven’t been wearing out in public!

As for what she loves about Brennon, Alexa quipped, “Everything.”

Brennan joked that it was a “generic” answer.

Brennon also revealed some of their marriage deals, like Alexa getting to dress him when they go out on the weekends, and Alexa having to dance with him whenever their wedding song plays. Their wedding song is Kane Brown’s song “Heaven.”

Alexa and Brennon also explained the key to their marriage. Alexa said, “We talk constantly about the ins and outs of everything. Like every few months, we’ll check in with each other, like, ‘Do I need to do anything more as a wife, as a husband, as a partner?’”