She wrote in the caption, “Mom & Dad in their favorite habitat 🏔🥾 #offthegrid.” The photo shoot was a family affair, with Heming giving photo credit to their 10-year-old daughter Mabel.

Bruce and Emma appeared to be on a nature walk in the outdoorsy photos, as they posed together on a log. In one pic, they look into each other’s eyes, and in another Emma leans against her hubby.

These are the first photos Emma has shared of the couple since the family announced he’s suffering from aphasia.

Last week, Emma, Bruce’s ex-wife Demi Moore, as well as his children Rumer, 33, Scout, 30, Tallulah, 28, Mabel and Evelyn, 7, were all part of a joint statement revealing Bruce was stepping away from acting. They said the aphasia was “impacting his cognitive abilities.”

Now, a source tells Us Weekly that everyone is rallying around the 67-year-old.

“He’s blessed to have them on hand,” the insider said of Emma and Demi, “They’re all pulling together, and that’s what matters.”

The source continued, “Emma, the girls and Demi are all united in being there for Bruce and ensuring he has the best possible treatment. Mercifully, he’s extremely self-sufficient at this point in time. They’re not taking anything for granted, but there’s a balance needed since he wants this handled with the minimum of fuss and is selfless to a fault about handling as much as he can.”

“Emma has been an absolute rock,” the insider added. “Not a day goes by that Bruce doesn’t tell her how lucky he feels to have her in his life.”

Of the Willis family, González shared, “I love them… Her entire family, you know, their legacy… I have so much respect, but health comes first and priority number one is always family, so the only thing we can do as friends is be there for them, support them, giving them all the love that we can and just hoping for the best.”

Eiza revealed that the family is “so optimistic” amid Bruce’s diagnosis.

“Extra’s” Rachel Lindsay also spoke with director Michael Bay about Bruce’s health and their time working together on “Armageddon.”

Bay said, “It’s very sad. I have very fond memories of Bruce from ‘Armageddon.’ He was tough for the first month. I was a young director… He’s a big movie star.”

He explained, “We got along once Jerry Bruckheimer said, ‘Show him some footage,’ so I did and [Bruce] said, ‘You should have shown me this a lot sooner, I would have been nicer to you.’” Michael recalled, “He was fun to work with.” 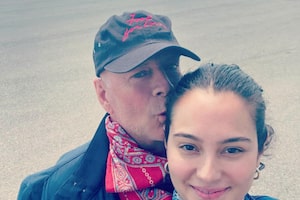 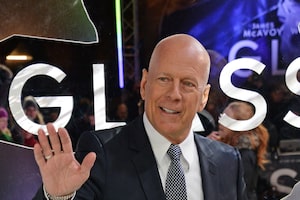 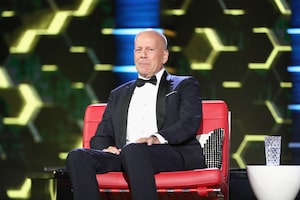