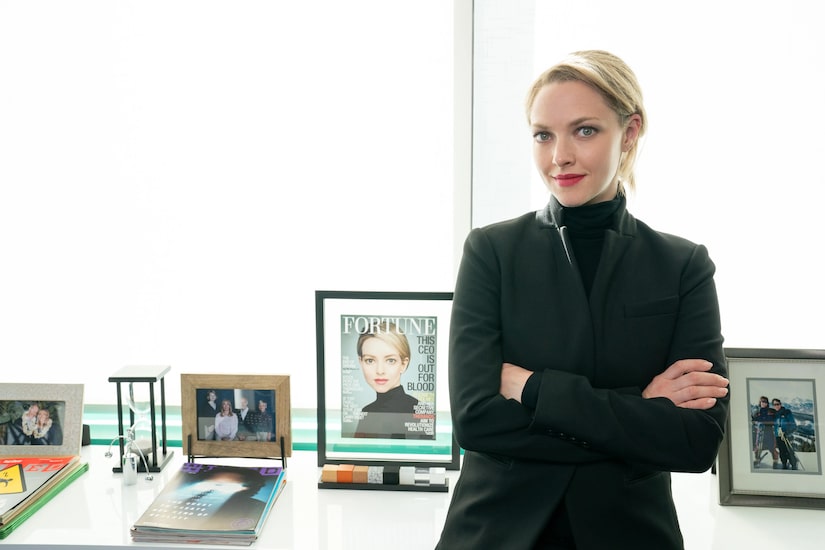 Amanda Seyfried’s transformation into Elizabeth Holmes in “The Dropout” is being called triumphant and fascinating to watch!

“Extra’s” Rachel Lindsay chatted with Amanda on how she became the Theranos founder, who she calls an “enigma.”

Bringing attention to Holmes’ “evasive” nature, Amanda commented, “That was one of the reasons I wanted to play her, but it also it gave me a lot of freedom because I was really taking from everything I’d seen, that taught me nothing about her, and leaning on everything that Liz Meriwether wrote in the show… I was taking a lot of the imagined reality and then everything that I learned from all of the footage I have, the deposition tapes.”

Seyfried combed through “nine hours of deposition tapes, Maria Shriver interviews, ‘20/20,’ ‘Dateline,’ [and] the documentary” to get herself familiar with Holmes’ mannerisms and gain “insight into how she spoke to people publicly.”

Understanding a private Holmes proved to be a challenge, since footage “is nowhere to be seen.” Thus, Seyfried had to use her imagination to try to grasp Holmes’ thought processes, saying, “That’s what people want to know… How does someone get from here to there?”

Amanda learned everything she could about the Stanford dropout, who scammed investors out of nearly a billion dollars. She noted, “There was so much studying. I am not an academic. I never went to college, and for the first time in my life — and I have two kids at this point — I was like, ‘I can’t wait to study.’ Any time they went down for a nap, I bought a laptop just for this and I would look at deposition tapes and write things down.”

In January, Holmes was found guilty of defrauding investors. She faces up to 20 years in federal prison and fines in the potential millions.

“Lost” actor Naveen Andrews plays Theranos COO Ramesh "Sunny" Balwani, who was also Elizabeth’s then-boyfriend. As for how he processed Elizabeth and Sunny’s relationship, Naveen said, “I took it at a very basic level, perhaps a simplistic level, which is the depth of his love for her. To me, he seemed besotted with her and I think he still is, even after what happened after the trial. I think he’s desperately in love with her, so it’s a question how far will you go for someone that you love? What are you prepared to do?”

Amanda chimed in, “Especially if that person believes wholeheartedly in what they’re doing… That’s a lot of the reason so many people came around to support her and invest.”

What does Amanda think Elizabeth would say of her portrayal? She answered, “I think if I were her, I would be slightly grateful that we took the time to explore the context. I think it’s the one thing being very public, a lot of things are one-sided, people believe what they want to believe about you with the information they have. That’s a disadvantage to being in the public eye. And every single human being is nuanced and complex, and we gave another perspective. And a perspective that especially in the beginning was very compassionate to her beginnings.”

Amanda also had her own fangirl moment with Rachel, telling her, “I’m going to take some of your time away — nobody told me that I would be meeting you. They did not tell me. Hold on a second. Just give me a second… I’m sorry, I can't help it, I’m just a big fan.”

“The Dropout” is streaming now.