Nick Cannon is apologizing for “any extra pain or confusion” he might have caused from his recent baby announcement.

On Monday’s episode of “The Nick Cannon Show,” Cannon confirmed that he was expecting his eighth child with model Bre Tiesi.

The confirmation came a little over a month after Cannon mourned the loss of his seventh child, son Zen, who died from brain cancer at 5 months.

He revealed that he knew about the pregnancy “for a while,” even before Zen passed away. He admitted that he was torn on when to share the news, saying, “So even going through all of that, this was always in the back of my mind, like, 'What is the right time? How do I share this?' No one, we didn't expect Zen to pass away... All of the news was so unexpected."

“I wanted to definitely respect the grieving process with Alyssa, and Bre was respectful enough — she held off making our announcements and speaking on social media. She's a very, you know, in the public eye type of person, but keeps her stuff private as well,” Cannon elaborated. “And it was just one of those things like, you know, I didn't know what to do. I didn't know what to say when I was dealing with Zen or to hold off. Even right now, that it came out yesterday, that wasn't planned to talk about it. We wanted to, you know, hold on as long as we can, but it happened. We here and I'm with my family I get to discuss it, I get to be open."

Days after his confirmation, Cannon apologized for failing to “protect and respect the privacy of the mothers of my children.”

“I misspoke and probably went too much into detail on Monday expressing my feelings," Nick explained. "And it probably felt like I was making some comparatives when talking about the passing of my son Zen and then also talking about the new child I'm expecting."

Cannon pointed out, “I didn't need to do that because those are two completely separate moments in my life and they both deserve the respect.”

Along with vowing to “do better with delicate and sensitive discussions,” Nick noted, “I know it seems awkward because people are trying to do the timing and all that… none of that matters. We lost a child and it still is a sincere and real situation.”

Nick made sure to show some love to Zen’s mom Alyssa Scott. He said, “I love her, I love my son Zen, and I always will. And I'm going to love my new child. I'm a responsible human being and I take full responsibility for everything, so I must say I sincerely apologize to everyone involved for any extra pain or confusion that I may have caused."

Earlier this week, Alyssa seemingly addressed Nick’s baby announcement. She wrote on Instagram, “It is painful having my son be a part of conversations that aren't in alignment with his light and legacy. It isn't something I chose for him or myself.”

She continued, “It's important for me to let you all know… I am centered, I am at peace. I look at everyone's predicament with loving eyes. I will not judge. I will consciously decide what I will participate in. I am surrounded by love. God, my mom, dad, sister, brother, and daughter continue to carry me."

Scott showed her appreciation to all the love and support that she has received since the passing of Zen. She shared, “I always say Zen expanded my heart in ways I never thought possible. He filled that space with compassion, knowing I would need that most.”

On her Instagram Story, Scott opened up further about Zen’s death, writing, “We knew since August that Zens time on this earth would be limited. We knew he would not make it to see 6 months. I am eternally grateful he was in the arms of the people who loved him most. I know we were fully present and with him in these moments. We love you Zen. We got you down here baby boy.” 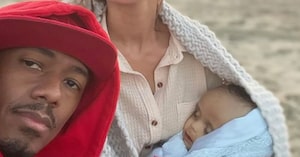 In the video, Nick explained that he and Alyssa welcomed the baby in June, and when the child was around two months old they decided to get his sinuses checked, believing “it would be a routine process.” That’s when they “found out he had another condition where it was fluid that was building up in his head… they called it a malignant tumor.” He added, “Immediately we had to have surgery, brain surgery. We had to put a shunt in his head and we were hoping for the best.” 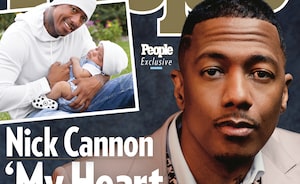