Anderson’s publicist Glenn Schwartz broke the news to Deadline that Anderson died Friday at a Las Vegas hospital, where he had just begun treatment for diffuse large B cell lymphoma.

The news comes just days after Schwartz revealed Louie’s cancer diagnosis. His publicist said at the time, “Iconic comedian Louie Anderson is currently in a Las Vegas hospital being treated for DLBCL Diffuse large B cell lymphoma, a form of cancer. He is resting comfortably.” 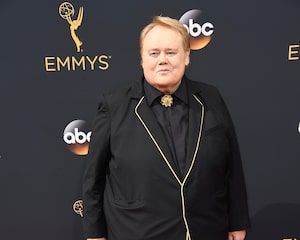 According to WebMD, diffuse large B cell lymphoma — or DLBCL — is “a cancer that starts in white cells called lymphocytes” and usually grows in lymph nodes. Some of the symptoms include a “lump in your groin, armpit, or neck,” as well as fever, night sweats, and shortness of breath.

Anderson, who was born March 24, 1953, in St. Paul, Minnesota, made his first appearance as a comic on "The Tonight Show" in 1984, a major milestone on his path to becoming, according to Comedy Central, one of the 100 greatest stand-up acts of all time.

In 1995, he created and produced the animated FOX series "Life with Louie" (1995-1998). For his voice work on the series, which focused on his childhood as the son of an abusive father, he won two Daytime Emmys.

He was blackmailed over his sexual orientation for a year from 1997, but eventually went to authorities, which resulted in a conviction that put his blackmailer in prison.

Anderson achieved his greatest success playing a woman, Christine Baskets, on the FX dramedy "Baskets" (2016-2019), about a dysfunctional family. He was nominated for an Emmy as Outstanding Supporting Actor in a Comedy Series three times, winning in 2016.

Anderson had always said Christine was a tribute to his late mother. Upon winning the Emmy, he emotionally said, "I'm just so overwhelmed... It's such an honor to get this award. I really give it up for my mom. This is like her being here, and I'm happy for her. She was a star in her own right, so, I couldn't be happier."

Anderson is survived by his sisters, Lisa and Shanna Anderson.

After the news broke, many big names mourned his loss. His "Louie Show" co-star Bryan Cranston wrote, "I was saddened to hear the news today of Louie Anderson's passing. Twenty six years ago I played his best friend in a series and this morning I've been wistfully remembering that experience with him. Louie was known for being big, but that wasn't just in his presence. He was also big-hearted. An expert in the craft of comedy, and a very kind man. Although The Louie Show only lasted six episodes…later on he was able to showcase his big talent on Baskets. I was delighted to see him really shine. Bravo, Louie. Rest now big fella."

Howie Mandel tweeted, "What is going on ? We just lost another beautiful funny friend . Omg there’s got to be more funny up there than down here. Norm Bob and now@LouieAnderson."

Louie Anderson : Your generosity of spirit will cover the world from above .. we are so lucky you were on earth for a moment , spreading your humor all over like bars of living gold .. Good Bye

Already faced the Reaper 4 years ago. Made me drop a buncha weight, switch to plant-based foods, and add daily exercise. I’m not shaking in my jorts today because I’m *always* worried my heart’ll attack me again.
RIP to both Meatloaf & Louie Anderson. Their art made life better. https://t.co/6YYDKw51PO pic.twitter.com/BGA8DGhtHe

Louie Anderson made me cry almost as much as he made me laugh. Never have I encountered someone with that much duality. A true Comics comic. Purging the depths of his pain to make you laugh. What beautiful soul. I ❤️❤️ u Louie. Hope your at peace now 🙏🙏. #BeautifulLegend