It looks like “Chicago Med” star Torrey DeVitto has a new man!

Over the weekend, DeVitto went public with her relationship with Chicago Cubs manager David Ross.

Along with posting a pic of herself kissing Ross on the check, she wrote on Instagram, “Love him madly. ❤️.”

Last week, Torrey hinted at the relationship by sharing a photo of David at a Cubs game, drawing a red heart around his head.

David competed on Season 24 of “Dancing with the Stars,” coming in second place with dance partner Lindsay Arnold. Before signing a deal to be the Cubs’ manager, he played 15 seasons in the MLB, winning two World Series with the Red Sox and the Cubs.

DeVitto previously dated “Blue Bloods” actor Will Estes. In October, she posted a now-deleted photo with Will, writing on Instagram, “2020 Accessory... Mask on ear so as not to forget it when leaving the house." 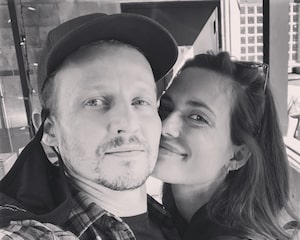 It is unclear when they called it quits.

In 2019, Torrey opened up about her ideal man, telling Us Weekly, “What am I looking for? A best friend, somebody to travel with, a partner, somebody who has the same values as me. You know? A family unit, traveling, just fun. But in the meantime, I'm having so much fun with my friends, and traveling and working."