“The Mauritanian” star Jodie Foster was beyond shocked to win at the Golden Globes, but she didn’t forget to thank one special person… Aaron Rodgers!

Foster rocked pajamas while accepting the award for Best Supporting Actress in a Motion Picture. After kissing her wife Alexandra Hedison, Jodie said, “I think you made a mistake. I’m a little speechless. I just never expected to ever be here again and… wow. I have to thank all of my amazing filmmakers, Kevin Macdonald and the real-life people… and Aaron Rodgers! This is awesome.”

Earlier this month, Aaron gave a major shout-out to Jodie while accepting his award for 2020 MVP of the NFL.

In his acceptance speech, Rodgers said, “Off the field, I've got a great group of people that support me, so I'd like to thank my team," before naming Jodie.

Rodgers revealed that he was “engaged” in the same video, leading many to speculate that Foster had introduced Aaron and Shailene Woodley, her co-star in “The Mauritanian.”

Foster recently appeared on “Jimmy Kimmel Live!,” where she discussed Aaron’s speech. She quipped, “You see, he said 'my team,' even though he said 'off the field.' That makes me a Green Bay Packer. People keep saying to me, 'No, Jodie, that does not mean you're part of the team.' But it does mean I'm part of the team." 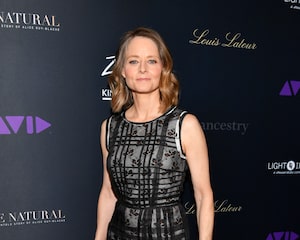 After Kimmel asked if Jodie knows Rodgers, the “big Packers fan” answered, “No!”

She emphasized, “He just knows I’m his biggest fan.”

When asked if she’d thank Rodgers if she wins a Golden Globe for “The Mauritanian,” she answered, “Absolutely. I may have to name the whole team. Davante Adams has to be in there somewhere."

Jodie definitely kept to her word by thanking Aaron!