“Extra’s” Billy Bush had a candid conversation with Paulina Porizkova about her life today following the death of her husband, Cars frontman Ric Ocasek.

The supermodel, 55, is learning to smile again after Ric passed away in 2019 amid their divorce. The couple did not have a prenup, and Ric left Paulina out of his will.

Billy said, “You find out afterwards that he’s written you out of the will… because ‘she has abandoned me,’ which must’ve been very hurtful to you.”

Paulina answered, “I thought, ‘How could he do this?’ I never abandoned him. He might have felt abandoned because we were getting a divorce. But that is not an abandonment. I was living at home, taking care of him. That’s so unfair.”

She revealed, “I was in no state to process it… I had just lost the man I’ve been with for 35 years. It’s like, money wasn’t what I was going to start thinking about.”

Billy asked, “You had to ask friends for money for groceries? Did it get that low?” She answered, “Yes, there was about a year of asking my friends to buy groceries.”

She continued, “It’s been over a year now and I’m kind of coming to terms with it… I sold the house that we lived in for 30 years. I moved out. It was kind of traumatic, but it’s done.”

Billy mentioned, “You gave a recent post saying that you’re hopeful and… in a good place.”

Paulina explained, “I am in a better place. A good place? That’s putting the bar a little… high.” She said she’s still hurting, though, adding, “Being able to wake up in the morning and only cry for five minutes is a major improvement.”

Porizkova, however, has entered a new chapter after selling the house. “Getting this apartment behind me… has been kind of thrilling…. In a way, it makes me feel hopeful, like it’s another beginning.”

Billy asked, “If you could talk to your younger self now — just before that marriage — what would you say?”

Paulina replied, “I would say… ‘What you need to do is start paying attention to the finances… Do not merge your finances.’”

Billy pointed out, “You’ve learned from it and you are still very young. And on that note... you posted a nude from your bedroom… But you did it in response to an attack Elizabeth Hurley got for posting something similar.”

Porizkova explained, “Well, she posted a really sexy shot of herself… and she got hate from people who said, ‘You’re too old to be doing this.’”

One of those people was Piers Morgan, who apologized after calling 55-year-old Liz “thirsty.” 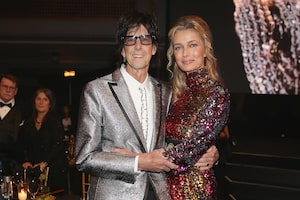