Kyle, 44, is now in a relationship with singer Cyn, 27, who just gave birth to their first child.

On Thursday, Cyn announced they welcomed a baby boy. Along with posting a pic of their baby’s hand, she wrote on Instagram, “Surprise! I'm a mommy. Yesterday, @kyle_newman and I welcomed into the world our darling, healthy son, Etienne Noel Newman."

Kyle is already the dad of sons James, 7, and Leo, 5, his kids with Jaime.

The couple made it Instagram official in December when they celebrated the holidays together with his kids. Along with posting a pic of the family in front of a Christmas tree, she wrote, “I love these happy guys so much ❤️ Merry Christmas 🎁🎄.”

Kyle also shared the same photo, writing, “Merry Christmas everyone! May your holiday be healthy and bright. I am thankful for all of the love in my life. And determined to radiate it back! ❤️🙏🎄✨❄️🎁🎅🏼🌟.”

Kyle and Jaime are still in the middle of an ugly custody battle over James and Leo. 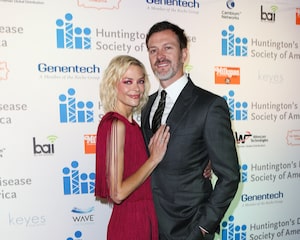 In court documents from November, Kyle requested sole physical custody with King having supervised visitation. In the papers obtained by People magazine, Kyle claimed, “I have been the children's primary caretaker since their birth and the children have spent the large majority of 2020 in my sole custody."

In response to the filing, King’s rep told People magazine, “Once again, Kyle’s lawyers have filed selectively redacted documents which perpetuate a false narrative about Jaime. Jaime’s utmost priority has been the well-being of her children and she will continue to pursue this privately for their sake.”

“She wishes Kyle only the best on set in Ontario where he is currently filming as well as successful sales of his newly released Dungeons and Dragons cookbook,” the statement continued. “She looks forward to harmonious co-parenting of the boys when everyone is back home in Los Angeles. Jaime currently has the children with her while she is filming a movie in Puerto Rico after wrapping the second season of her television series.”

Two years ago, “Extra’s” Adam Weissler chatted with Cyn about her single “Moment of Truth” from the animated film “Smallfoot.”

Cyn has been mentored by Katy Perry and garnered success and acclaim with her recent hit “Believer.”