A month after participating in the “Fast Times at Ridgemont High” live read, Brad Pitt and Jennifer Aniston still have people talking!

Matthew McConaughey also took part in the virtual event, and shared his take on the “sexual tension” between Brad and Jennifer, who played Brad Hamilton and Linda Barrett.

Morgan Freeman narrated the racy fantasy sequence in which Brad, who is pleasuring himself, imagines Linda seducing him after climbing out of his pool. 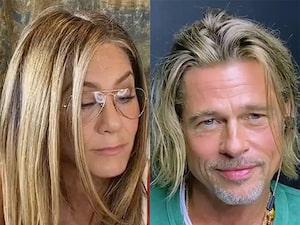 During the read, Aniston told Pitt, while in character, “Hi, Brad. You know how cute I always thought you were. I think you're so sexy. Will you come to me?”

Pitt couldn't help but blush during the scene, which ended with the fantasy broken by a knock on the door. Pitt, in character, demanded, "Doesn't anybody f**kin' knock anymore?”

During an interview on “Watch What Happens Live,” Matthew was asked if he could feel Brad and Jen's sexual tension, saying sarcastically, “Could I feel the heat through the screen of Brad? So palpable. Yeah, yeah, it was so palpable.”

Laughing, he admitted, “I noticed that after, that's what a lot of the topics were about that, or about them. No, I actually didn't notice anything through the screen, but that made for a good topic the next day."