On Thursday, Cave revealed that she gave birth to a baby boy. Along with a pic of her bundle of joy, she wrote on Instagram, “Abraham 'Bam' Benjamin Our baby boy was born in the early hours yesterday morning just 40 mins after my waters were broken. Slightly extreme but so were his kicks throughout the pregnancy!"

Jessie also opened up about her scary birthing experience. She revealed, “This has been a very different experience to my first two births... much more humbling, terrifying and out of my control.”

“We are currently in the neo natal unit but he's a strong boy and it's the safest place for him right now,” Cave continued. “The midwives (Magda & Daisy) and the doctors and neo natal nurses have been amazing (our first one to welcome us into the ward was named Rosaria and she was extremely comforting). Thank you for all the cosmic well wishes."

In the post, Jessie showed her appreciation for partner Alfie Brown, saying, “Thank you to @alfiebrowncomedian for being so wonderful (again) and taking this picture in the seconds after he was born and just moments before he was wheeled away out of our arms... honestly one of the hardest moments of my life....”

Despite a difficult birth, Jessie remained positive about their third child. She said, “hopefully he will be with us soon and it will be even more perfect ❤️.”

Jessie and Alfie are also the parents of Donnie, 6, and Margot, 4.

In June, Jesse announced she was expecting. Debuting her growing baby bump, she wrote on Instagram, “Oops I did it again 🤰🥰 ❤️ 🍂.”

Cave is most known for her role as Lavender Brown in the “Harry Potter” franchise. 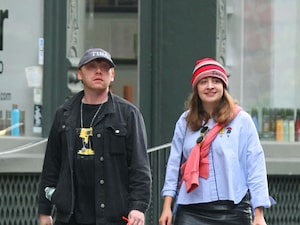 Just a few months ago, her co-star Rupert Grint welcomed his first child with girlfriend Georgia Groome. A rep for the couple told People magazine, “Rupert Grint and Georgia Groome are delighted to confirm the birth of their baby girl. We would please ask that you respect their privacy at this very special time.”