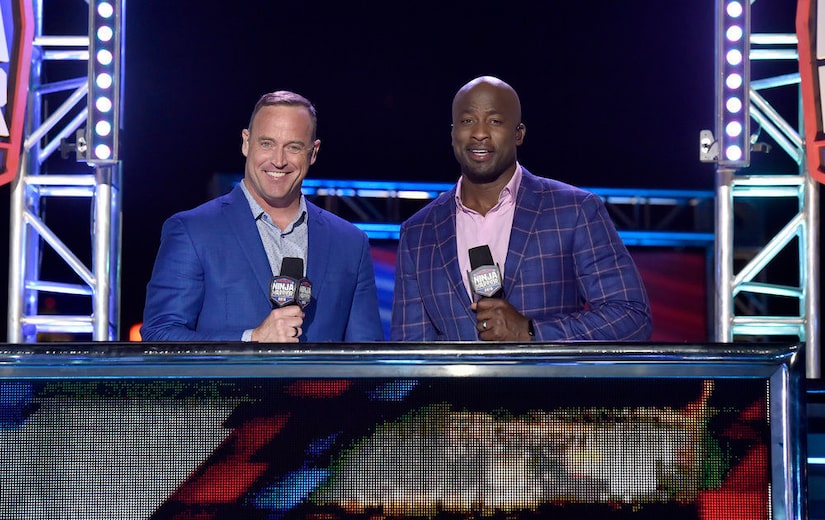 The new season of “America Ninja Warrior” may be on hold for now, due to the COVID-19 pandemic, but you can still see the show's hosts, Matt Iseman and Akbar Gbajabiamila, compete on Ellen DeGeneres' hit NBC show “Game of Games.”

The duo chatted with “Extra's” Renee Bargh via Zoom about how they are doing during the quarantine, and about their fun episode of “Game of Games.”

They shot the show before the coronavirus pandemic. Akbar dished, “That competitive juice came out between Matt and I, and it's crazy — when you're under that pressure with teammates, you don't want to let them down.”

Matt commented, “Ellen is one of the most fun people around… It was awesome for us to get to step in, and we're both competitive, we've gone head-to-head a number of times but — Akbar, back me up on this — it was so nice not to be strapped to a chair and dunked in a tank of stink slime.”

Akbar quipped, “No, I wouldn't want any part of that.”

The two are looking forward to getting back to work on their show, which would normally be shooting right now. Matt said, “As soon as we can get the ninja athletes on a course, we'll get this shooting and turn it around as quickly as possible… I know a lot of the ninjas are training at home so they're going to be ready.”

As for how they are state of mind during the COVID-19 crisis, Matt shared, “I'm trying to find the silver lining. Being at home has helped me slow down. Appreciate being at home and, honestly, the funny thing is I feel like I'm connecting more with family and friends.”

Akbar added, “I've got four kids at three different grade levels… It's tough, especially that fifth-grade math. Love the breaks, though, the recess. I'm in charge of PE. True story: I actually made a ninja warrior course.”

Matt, who is actually a medical doctor, pointed out, “I think it's scary times where as doctors you train for so many things, but I don't think anyone ever thought we'd be on the front lines… They really are everyday heroes… A lot of people have asked have I considered going into the hospitals to help and, unfortunately for me, I have rheumatoid arthritis, so the medication I'm on suppresses my immune system.”