The race car driver, his wife Amy, 1-year-old daughter Isla and two pilots were on the 10-seat Cessna when it crash-landed and caught fire at Elizabethton Municipal Airport in Tennessee.

TMZ reports the family has been released from the hospital, and NBC Sports confirmed that Dale would be taking the weekend off from his work as a NASCAR analyst.

She also thanked everyone for their support, writing, “We want to reiterate our appreciation to the NASCAR community, first responders, medical staff and race fans everywhere for the overwhelming support in the last 24 hours… We are assisting the Federal Aviation Administration and the National Transportation Safety Board in the investigation and will have no further comment at this time.”

BREAKING PHOTOS: Plane reportedly carrying Dale Earnhardt Jr. and his wife crashes in Elizabethton, Tennessee; both are believed to be okay following the crash - WJHL-TV pic.twitter.com/DpB7CSx4hg

Elizabethton fire chief Barry Carrier described the fiery scene to USA Today, saying the aircraft wrapped around a fence at the end of the runway and slid into the grass where it was seen burning.

Carrier told the paper, "The first word to come to my mind is that they were very lucky. It looks like everything worked in their favor instead of against them." 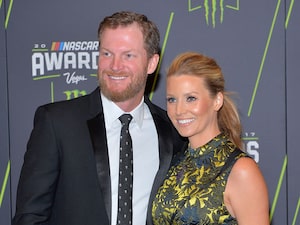 NBC affiliate WCYB posted a photo of the fiery plane, and video of Dale being treated at the scene.

In addition to his job as a NASCAR analyst for NBC, Earnhardt Jr. is also a part-time racer in the Xfinity Series. His next race is scheduled for August 31.