Days after suffering a stroke, famed director John Singleton is reportedly in a coma.

According to court documents obtained by TMZ, Singleton's mother, Sheila Ward, wants to establish a temporary conservatorship since he is “unable to properly provide for his personal needs for physical health, food, clothing, or shelter."

Ward noted that he was involved in several projects, even preparing to sign a lucrative settlement deal. She is asking a judge to approve her as the conservator so she can handle his business affairs and execute the deal.

Last week, Singleton checked into a hospital for weakness in his legs. He suffered a stroke in his hospital room. At the time, his family told People magazine, “On Wednesday, April 17th our beloved son/father, John Singleton, suffered a stroke while at the hospital. John is currently in the ICU and under great medical care. We ask that privacy be given to him and our family at this time and appreciate all of the prayers that have been pouring in from his fans, friends and colleagues.” 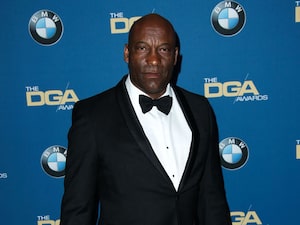 The 51-year-old had just returned from a trip to Costa Rica. Last month, he wrote on Instagram, "Goodbye Costa Rica... one of my new favorite places in the world.... so much to see so little time..."

Earlier this month, he was prepping for the third season of his executive-produced FX show "Snowfall."

After news broke about his stroke, big names sent their well-wishes to the 51-year-old on Instagram. Snoop Dogg wrote, “Pray 4 my brother 🙏🏽👊🏿✨💙. @johnsingleton.”

Prayers up Ya'll. I just woke up & heard director John Singleton had a stroke. We still need you Sir, please fight it & bounce back.😢

john singleton was very nice to me when i was an intern in Cannes in 1999. like, so much nicer than he had to be. sending love and good thoughts for a speedy recovery.

Prayers up for my brother John Singleton 🙏🏿🙏🏿🙏🏿