Former “The View” personality Star Jones is married for the second time!

On Sunday, Jones tied the knot with boyfriend Richard Lugo on a Royal Caribbean cruise in the Bahamas in front of around 150 close friends and family, People reports.

Some of the famous guests included Tina Knowles-Lawson, “The Real Housewives of Atlanta” alum Phaedra Parks, and Holly Robinson Peete.

Tina posted a pic, writng on Instagram, “With all my beautiful fly girls on the seas❤️ here to celebrate the love and Union of Star Jones and Ricardo ❤️❤️❤️.”

Before they exchanged vows, Jones, 55, posted a pic on the cruise with their dogs, saying, “Yayyyyy. The #princessbride & @iampinkymichelle at our #bacheloretteparty at sea! #anthemoftheseas #anthemtolove.” 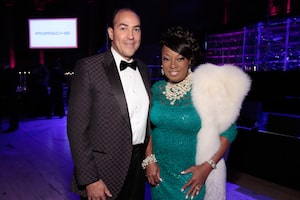