“Extra's” Mario Lopez recently sat down with David Beckham as they reminisced about Eva Longoria's wedding and talked about his stripped down push-up challenge.

David and Mario were both guests at Eva's wedding with Jose Antonio Bastón in May. Months after the wedding, Beckham shared, “It's all a blur.” During the special occasion, Mario and David even shared a special moment, lip-syncing to Rick Astley. David joked, “I knew it was a bad idea at the start.”

David was joined at the wedding by his wife Victoria, who is doing “good.”

Moving on from the wedding, Beckham recently stripped down to just his undies, for the 22 Push-up Challenge, which raises awareness for those who serve in the military and suicide prevention among veterans. He said, “It's a great cause.” He added, “I knew this was coming!”

Not only was David shirtless, he did the push-ups on a piano in one video. He shared, “I just finished filming in China, so I had a glass of wine. I was a little delirious from all the jet lag… there was three of us, me [and] two of my mates, saying, 'This is a really good idea — we'll do push-ups in my underwear on a piano.' It was a great idea until we woke up the next morning and felt, 'What have we done?'”

Of the video, David pointed out, “It got 9.5 million views, so that's what it needs.”

Beckham is reuniting with Kevin Hart for a crazy new campaign with H&M. He shared, “[The first campaign] went so well, people loved it so much. We then started talking about a sequel and I said, 'How are we gonna better it from the first one?' and then we said, 'Road trip.'”

David's son Brooklyn recently made headlines for his split with Chloë Moretz. On what advice he offered to Brooklyn, he commented, “Always be respectful — and he is!”

Though Brooklyn is at an age where he can date, David's daughter Harper still has a long way to go before she's at the same stage. David added, “I'm not even thinking about that at the moment — that's not even entering my mind… Harper dating, I'm like, 'Yeah, that's never gonna happen.'” 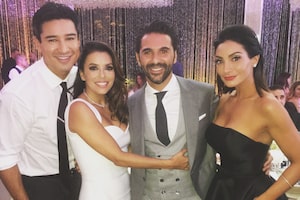 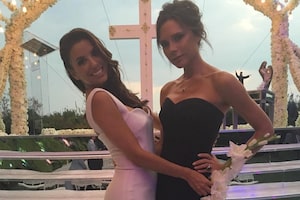 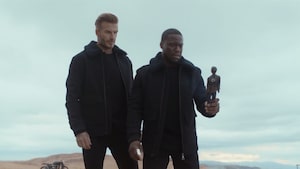