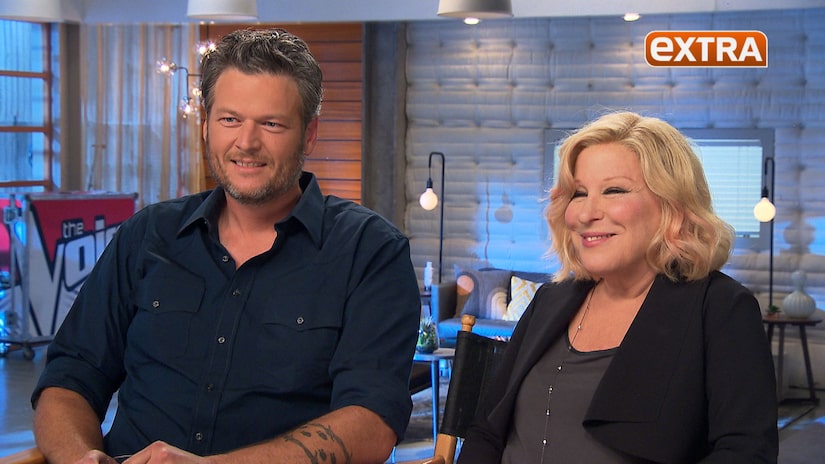 It's official: Legendary performer Bette Midler is signing on as Blake Shelton's guest mentor on Season 11 of 'The Voice,' and only “Extra's'' Renee Bargh was able to sit down with the two singers for their first interview together!

Blake and Bette were over the moon about working together. Blake smiled, “I can't believe you are sitting here.” Bette, who has won countless award throughout her career, gushed over the opportunity to work with the country music star. She shared, “I thought, 'He's really cute, he's really funny, he has a tremendous amount of personal charm, and I would like to be in his orbit, so why not?' and he writes... I'm a fan of his music.”

Already demonstrating their team chemistry, Blake jumped in and said, “You didn't talk about how good I am at being a coach.” Bette added, “And he's a tremendous coach. Actually, you are an excellent coach. I was a little bit freaked out to have to do this 'cause I thought, 'What the hell am I gonna tell these kids?' I'd seen other coaches and their riffing and running and I'm like, 'I can't do that.'”

She continued, “Now I'm in your presence and I see how you're so encouraging and you're very warm... the people who come through here feel like you're rooting for them, and I feel that's really important — it lets them relax.”

With their own technique for working with his team, Blake commented, “I can change somebody's song, she changes people's lives with her notes.”

Blake also revealed he had never met Bette before the show. “I always wanted to. I actually use my position here on 'The Voice' to meet people who I want to meet.”

Bette admitted she was unsure about taking the gig until Bruce Springsteen encouraged her. “He said, 'You do have it in you to tell them what to do,' and I didn't believe that until he showed me who I was.”