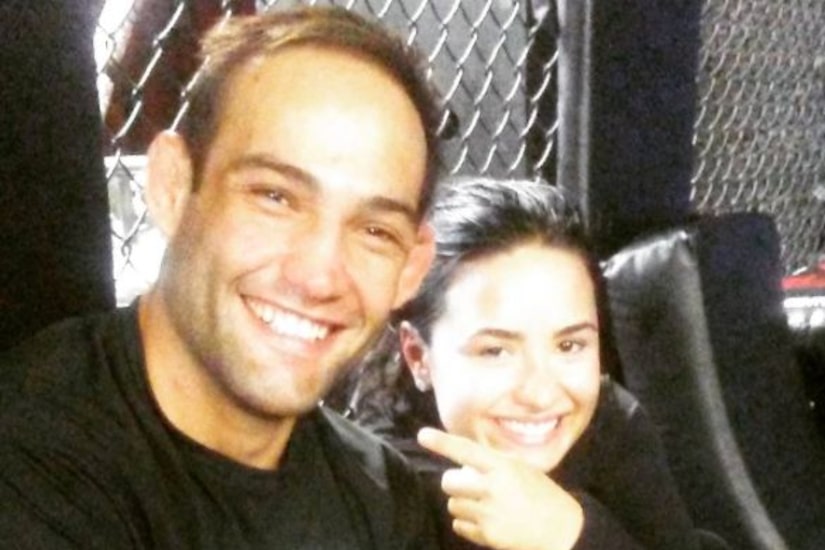 She is currently on the road with the 2016 Honda Civic Tour featuring Demi Lovato & Nick Jonas: Future Now, but Us Weekly reports that recently single Demi may be finding time to hang out with an MMA fighter.

After ending a nearly six-year relationship with Wilmer Valderrama, Demi is reportedly seeing fighter Guilherme "Bomba" Vasconcelos, a world champion in his field.

According to Us Weekly's source, the two both train at West Hollywood's Unbreakable Performance Center, where they met. They reportedly aren't serious, with another insider saying they're "just having fun. Demi's still looking to meet new guys."

A video posted to Vasconcelos' Instagram three weeks ago shows the heavily tattooed athlete receiving an excited hug of congrats from Demi, who had VIP seats for one of his matches.

In a post from five weeks ago showing him smiling alongside a sheepish Demi, Bomba wrote, "After I sparred with a legend @xcnatch.. The one who hit my lip and made me bleed was @ddlovato hehehe..."

Time will tell if the two get more serious or less.

Back on June 3, Demi and Wilmer released a statement that read, "After almost six loving and wonderful years together, we have decided to end our relationship. This was an incredibly difficult decision for both of us, but we have realized more than anything that we are better as friends. We will always be supportive of one another.”