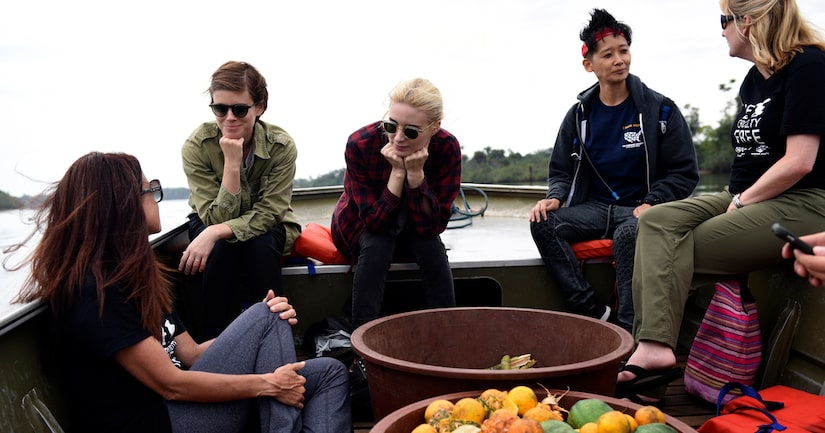 Kate and Rooney Mara recently flew to Liberia, Africa, with The Humane Society of the United States to visit more than 60 abandoned chimpanzees left to die by the New York Blood Center one year ago.

The chimpanzees were used as part of invasive research for decades by the NYBC, which decided to pull the funding required to care for them earlier this month. After the visit, the two sisters wrote an open letter to persuade the NYBC to renew its financial obligation to the abandoned chimpanzees.

The letter was addressed to Dr. Hillyer, the president and CEO of NYBC. Kate and Rooney started off the letter, saying, "As you are aware, when you withdrew all support for these chimpanzees one year ago, you left them in a life-threatening situation. If it had not been for the dedicated caretakers and emergency care from nonprofit organizations like The Humane Society of the United States and Humane Society International, these chimpanzees would surely have died horrible, slow and painful deaths from dehydration and starvation.”

They continued, "The public is understandably furious with NYBC for its inhumane and despicable decision to abandon these chimpanzees who unwillingly gave over 30-years of their lives to medical research. Further, your organization left the government of Liberia (one of the poorest countries in the entire world), while in the midst of an Ebola outbreak, and other nonprofit organizations with fewer resources than NYBC, to pick up the pieces. You completely ignored pleas for intervention when it was clear that your withdrawal left the chimpanzees in a dire situation. Regardless of any legal obligation you may have to these chimpanzees, you absolutely have a moral and ethical one. These incredibly special and intelligent animals deserve the retirement they are owed, which includes lifetime care--food and water at the bare minimum.”

"We were recently fortunate enough to visit the chimpanzees and their dedicated caretakers in Liberia. They are now being fully supported by The Humane Society of the United States at a cost of $20,000 per month. Despite the physical and emotional trauma these animals have endured (documented in records detailing frequent, painful liver biopsies, surgical procedures, and weekly darting as well as handwritten scribbles noting the animals' fright and emotional trauma) they are doing amazingly well. The resilience of these animals is astonishing and humbling to say the least,” the Mara sisters wrote.

Kate and Rooney also felt that NYBC still had time to make things right. "NYBC still has an opportunity to correct the wrongdoings of the past. It's never too late to choose compassion over indignity. We urge you to work with The Humane Society of the United States to determine a solution that would be beneficial for the chimpanzees and for the people of Liberia who depended on you.”

For more on how to help, visit HumaneSociety.org!