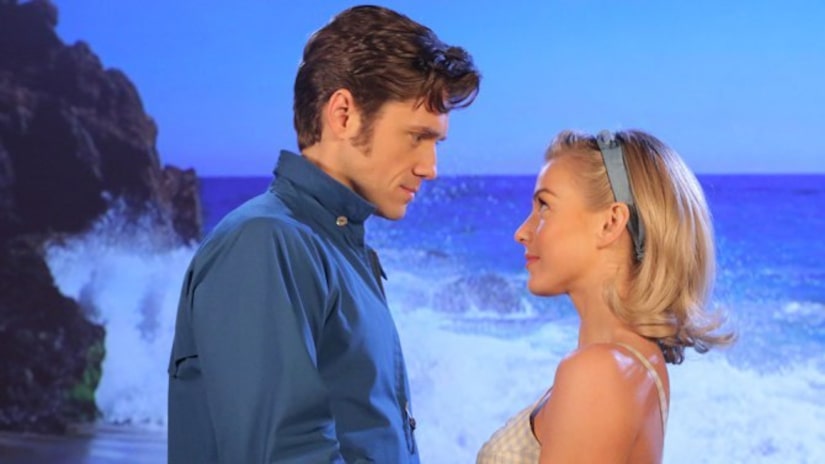 Variety goes behind the scenes for the final "Grease: Live" dress rehearsal, and the forecast is calling for lots of colorful umbrellas.

The FOX production, which stars Aaron Tveit, Julianne Hough, Vanessa Hudgens, Keke Palmer, Carly Rae Jepsen, Carlos Penavega, Jessie J, and "Extra's" own Mario Lopez, is scheduled to be aired from three lots — one of them outdoors — at Warner Bros. in Burbank, California, where the weather man promises rain. The uncovered lot is a carnival scene, for which cast members will be provided colorful umbrellas. They have already rehearsed on wet surfaces to prepare for any slipperiness.

Paramount TV president Amy Powell says, "We'll film outside unless it's a safety issue and only for the carnival scene. We'll let the guilds decide."

Rain isn't the production's only challenge — it is so tightly timed that Hough, playing the iconic role of Sandy, has only a 90-second cool-down after a massive dance number before having to sing the ballad "Hopelessly Devoted to You." There isn't much room for human error, so the cast has been working hard to get everything absolutely perfect.

As special treats for the beloved musical's fans, the show will include a brand-new song for Jepsen's character, what Variety calls "a memorable costume change" for Palmer, appearances by real-life bands Boyz II Men and DNCE, and a live studio audience of 650.