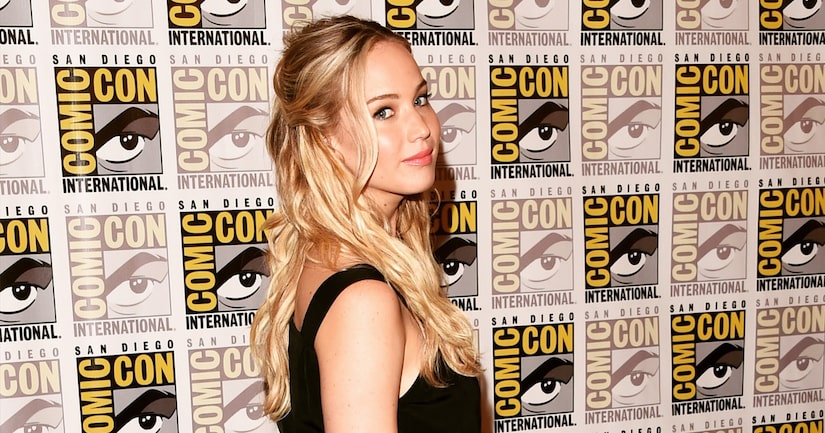 Jennifer Lawrence had the best day at Comic-Con yesterday, geeking out over meeting Bill Murray, belting out Cher's “Believe” on “Conan,” and talking about the final installment of “Hunger Games” with fellow “Mockingjay Part 2” co-stars at the 6,500-person capacity Hall H in San Diego.

“Extra's” Renee Bargh caught up with the star who admitted that saying goodbye to the “Hunger Games” franchise was hard, revealing what it was like filming the last day. “It was incredibly emotional, we just held each other, we cried.”

The star says it all seems ridiculous now as she still hangs out with her co-stars. “We all hang out, like, me, Josh, Liam and Woody hung out three weeks ago, I think, and Josh and Liam and I see each other all the time, so now we feel ridiculous for having cried, because we all live in L.A.”

The 24-year-old is never afraid to have a little fun, and was recently photographed looking ridiculous with chopsticks hanging from her nostrils. “We were at sushi. I was with my girlfriends and I knew that there were like a hundred photographers waiting outside, and so I just couldn't help it. I couldn't just seriously walk out.”

Next up for Jennifer, a sci-fi movie with Chris Pratt that she's reportedly banking $20 million for. Renee said, “Congratulations for winning the gender wage gap fight, which is so huge. Between you and Taylor Swift, I feel like you young ladies are changing the game in so many ways.”

Lawrence took the opportunity to praise her friend Swift. “Taylor Swift is a badass. That letter she wrote about Apple? I texted her and was like, 'You is a badass bitch.' She's awesome.”