Lady Antebellum singer Hillary Scott's tour bus caught on fire Thursday morning when the country singer was on her way to the Academy of Country Music Awards. Scott, her husband Chris Tyrrell, her manager and a driver were all onboard and had to evacuate after they noticed smoke coming from the bus. Luckily, everyone got out before the bus was overcome with flames.

“Extra” joined Lady Antebellum as they rehearsed for their ACM performance, where Hillary opened up about the fire for the first time. “Honestly, when you see the footage of what happened yesterday and how crazy it was to know that clothes, an iPad, and some toiletries were the only things that really got destroyed, is a true miracle.”

Scott continued, “Everybody, the first responders in Dallas, they were amazing, all the policeman, fireman, nobody was hurt and my little girl was safe at home, which is really, really important and we're all good.” She went on, “I believed in miracles before yesterday, but even more so today.”

Scott recalled being awakened when the fire started and joked about “thankfully wearing decent looking pajamas.” The group collected the essentials and headed out of the bus in seconds, she explained, and got to a safe distance. Listen to the 911 call below.

The ACM-nominated singer said that the clothes that she was supposed to wear to this weekend's award show were destroyed, but have been replaced with duplicates. The country trio is up for Vocal Group of the Year.

Scott called the nomination special, saying, “Well, the ACM award was the very first award we every took home, and it was really early on in our career, so every chance we get to be nominated here at the Academy Country Music awards is amazing, so it's just really special.”

The group is also excited to perform their brand new single, “Long Stretch of love,” at such a big venue. Band member Dave Haywood said, “Being up on this stage in the heart of Texas, this is I think great for country music, great for the state, but great for the genre. It's great to see it on such a massive stage, and it's such a big genre around the world, I'm excited we get to put it in a stadium for the ACM awards.”

The 50th Annual Academy of Country Music Awards take place at AT&T Stadium in Arlington, Texas the home of the Dallas Cowboys, airing this Sunday on CBS. 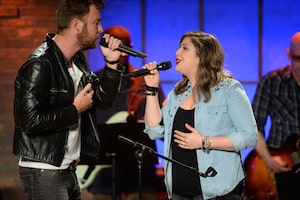 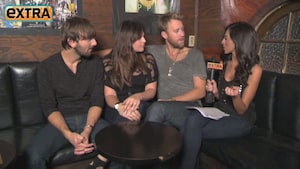 Lady Antebellum on Group Therapy: 'Any Band Needs It' 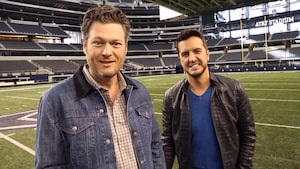