Patricia Arquette just won the Oscar for her role in “Boyhood,” and is now starring in the CBS drama “CSI: Cyber.” Patricia joined “Extra's” AJ Calloway at our H&M studios in Times Square, dishing on her new role and her big win.

Arquette plays special agent Avery Ryan, who heads the cyber crime division of the FBI in this new addition to the “CSI” franchise. The actress revealed that working on the show has changed how she uses technology. “I did deleted 30,000 emails, I don't even have email on my phone anymore, I'm literally going back to writing with a pencil.”

Patricia calls the subject matter covered in the series “pretty terrifying,” adding, “Every time I get one of the scripts, I'm like, 'Oh lord, please, please tell me they can't do these things?!'”

The 46-year-old is still in shock over her Oscar win. “It really hasn't set in, it's really surreal, people will say congratulations on your Oscar, and I'm like, 'I won an Oscar, it's true, that's crazy!'”

Patricia admitted she knew she wanted to mention wage equality for women in her acceptance speech if she won, but kept it a secret until her name was called. “I didn't want to tell anyone in case anyone tried to talk me out of it… it's just really clear when you start researching it. You see the devastating effects on America.” 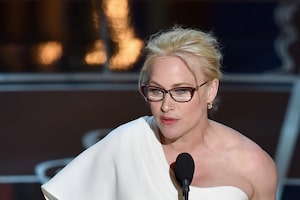