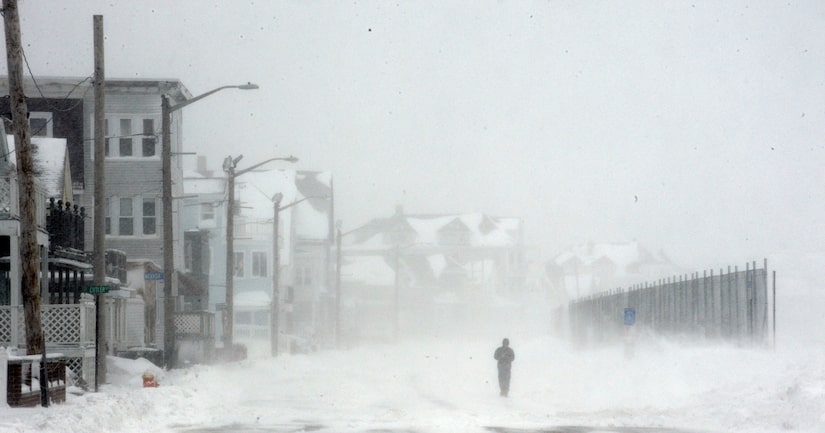 Here's what they had to say:

Justin Bieber: “Everyone on the east coast be safe with the storm coming."

Michael Ian Black: “Lord, please let it snow so much that everything is canceled for two weeks but my Internet remains on and there's plenty of grilled cheese.”

Emmy Rossum: “Wishing I was in NY for this snow storm.”

Snooki: “Everyone be safe on the east coast with this blizzard! Just stay inside, watch movies and drink hot cocoa.”

Gilbert Gottfried: “How do you tell a Snow Man from a Snow Woman? Snow Balls. I apologize to all Snow People. RT Immediately! #blizzardof2015.”

Miles Teller: “Hey New Yorkers, I was once stuck in a stranger's apartment during a blizzard for 48 hours & I filmed the entire thing @TwoNightStand.”

Kirstie Alley: “Good morning!!! I wish I was in NYC snowed in… is it really an UBER blizzard? Or just News Channel Panic?”

Ronan Farrow: “On the upside, Congressional productivity was frozen solid well in advance of the #blizzardof2015.”

Chris Harrison: “The only cure for #SuperStorm2015 is a hot new episode of #TheBachelor.”

Lena Dunham: “Hope you're enjoying this suspenseful will-she-or-won't-she blizzard story (aka sorry!) There was a med student writing a paper on UTIs next to me at the gate and I was like DO YOU NEED FIRST PERSON STORIES!? A gate agent in a nice hat called me precious and I teared up. I have only A 1 sauce waiting for me in my house in NYC. Not even complaining.”

Jesse Tyler Ferguson: “When is someone in NYC going to start instagraming photos of the snow?”

Hugh Jackman loaded up on pasta:

The only blizzard im ok with. pic.twitter.com/SuFYaHB71B