"Extra" caught up with David Letterman's "The Late Show" longtime cue-card holder, Tony Mendez, who was recently fired after allegedly assaulting a writer on the set.

While walking his dog in NYC'S West Village on Monday, he was asked if he had any regrets about losing his job after the alleged confrontation with writer Bill Scheft.

Mendez replied, "I don't want to talk about anything except to say that Dave is the best boss in the world, a good and generous friend and I love him."

Mendez then explained that he "caught a mouse in a humane trap" in his apartment and was on his way to "take him and release him in the river."

He added, "I'm going to go release the mouse by the river… they jump out right away. His name is Robert. Now let me go release him. He might die. He's got holes to breathe, but I got to do it right now. Thank you."

Letterman has not commented on the incident. 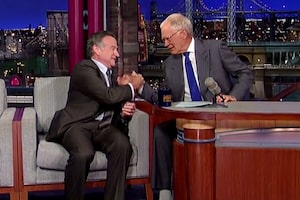