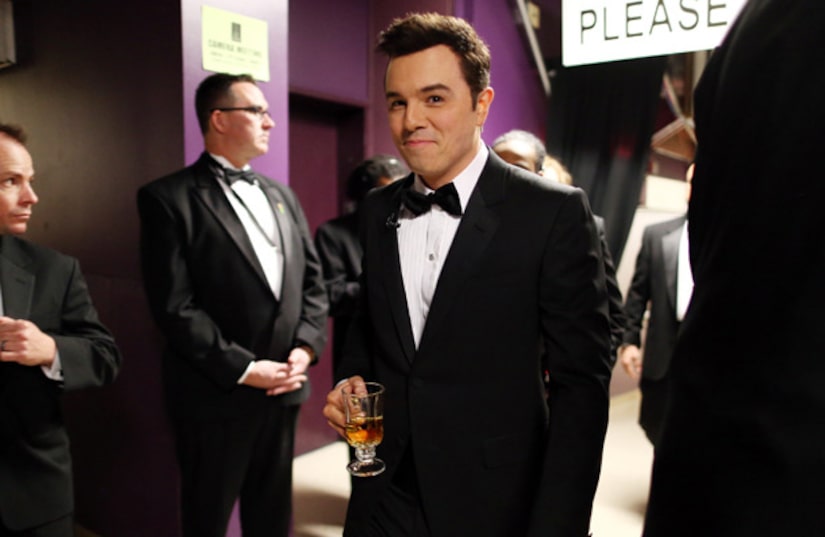 Host Seth MacFarlane came to the 2013 Oscars locked and loaded, and the stars came ready to duck and cover. Minutes after ripping and roasting the A-list in front of a billion people, “Extra’s” Maria Menounos nabbed an exclusive interview with MacFarlane backstage and got his reaction to the show.

While hiding from the press line, Seth took a moment to reflect on Hollywood’s biggest night. When asked about his favorite show moment, he told Maria, “There were too many. I guess if I had to pick… [William] Shatner is up there, because he put on the uniform. He came out there... he brought it and was awesome.”

Shatner's bit — via a Captain Kirk from the future — was meant to save MacFarlane from getting ripped by the press the day after the show. How did the “Family Guy” creator think he did?

“We'll let the always generous critics determine that,” he quipped.

While early reviews were mixed, Ben Affleck and George Clooney both thought he was “great.”

Ben explained, “I thought he walked a beautiful line between being sharp and making jokes that were funny, but also not just being over the top just to be over the top to show he could do it.”

Seth hit George with a zinger during the show, but the jab didn’t bother the Oscar winner, who explained, “I've never not gotten a hit, so I'm fine with that, but he's a friend. I like him a lot. I thought he was funny.”

Seth’s biggest supporters, his father Ron and sister Rachael, were behind him all the way. They told Mario before the show, “Seth we love you, we're so incredibly proud of you and we know you're going to be spectacular, absolutely spectacular... knock ‘em dead.”